A few more bits and pieces finished off in April and May - some nice plastic terrain from Drakerys, comprising of Scenery Set A and Scenery Set B. I also painted a Mantic Dungeon Saga door because.. why not? 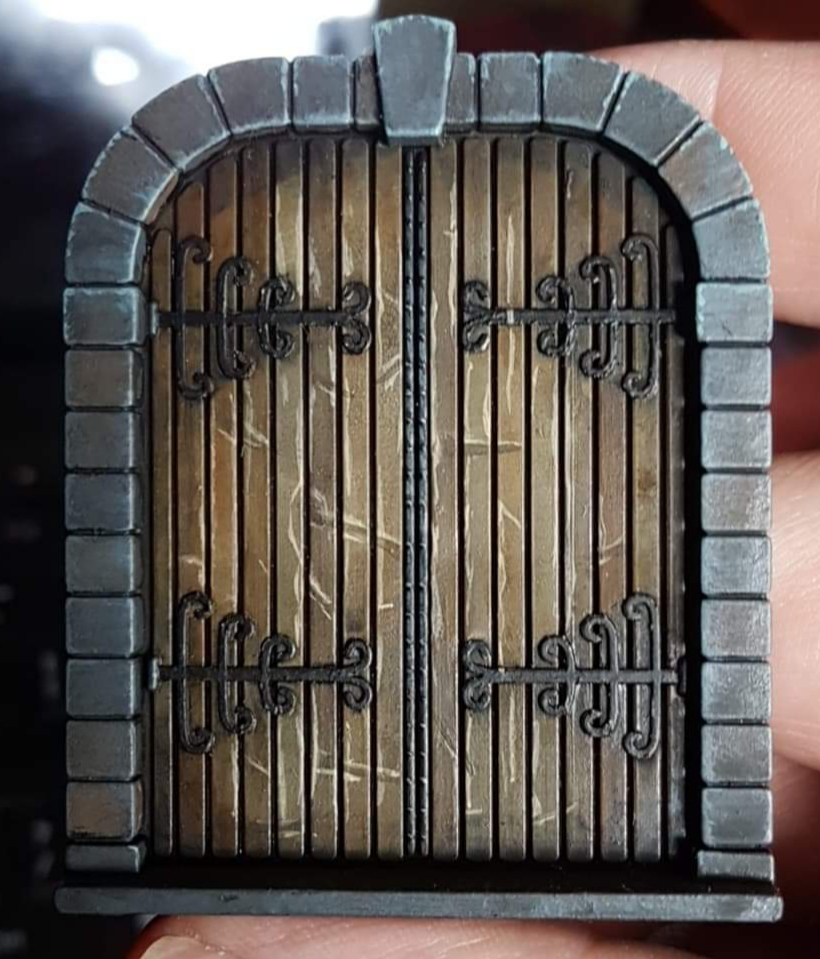 Even I finish things. Sometimes..

Hobby butterfly that I am, it is inevitable that I will occasionally - and often by accident - finish a project that I started. That has been the case in Feburary and March of this year where I finished off some terrain pieces primarily for Rangers of Shadowdeep. The excellent Gloomburg Tower from Warcradle and a bridge and walls from Warlord.. 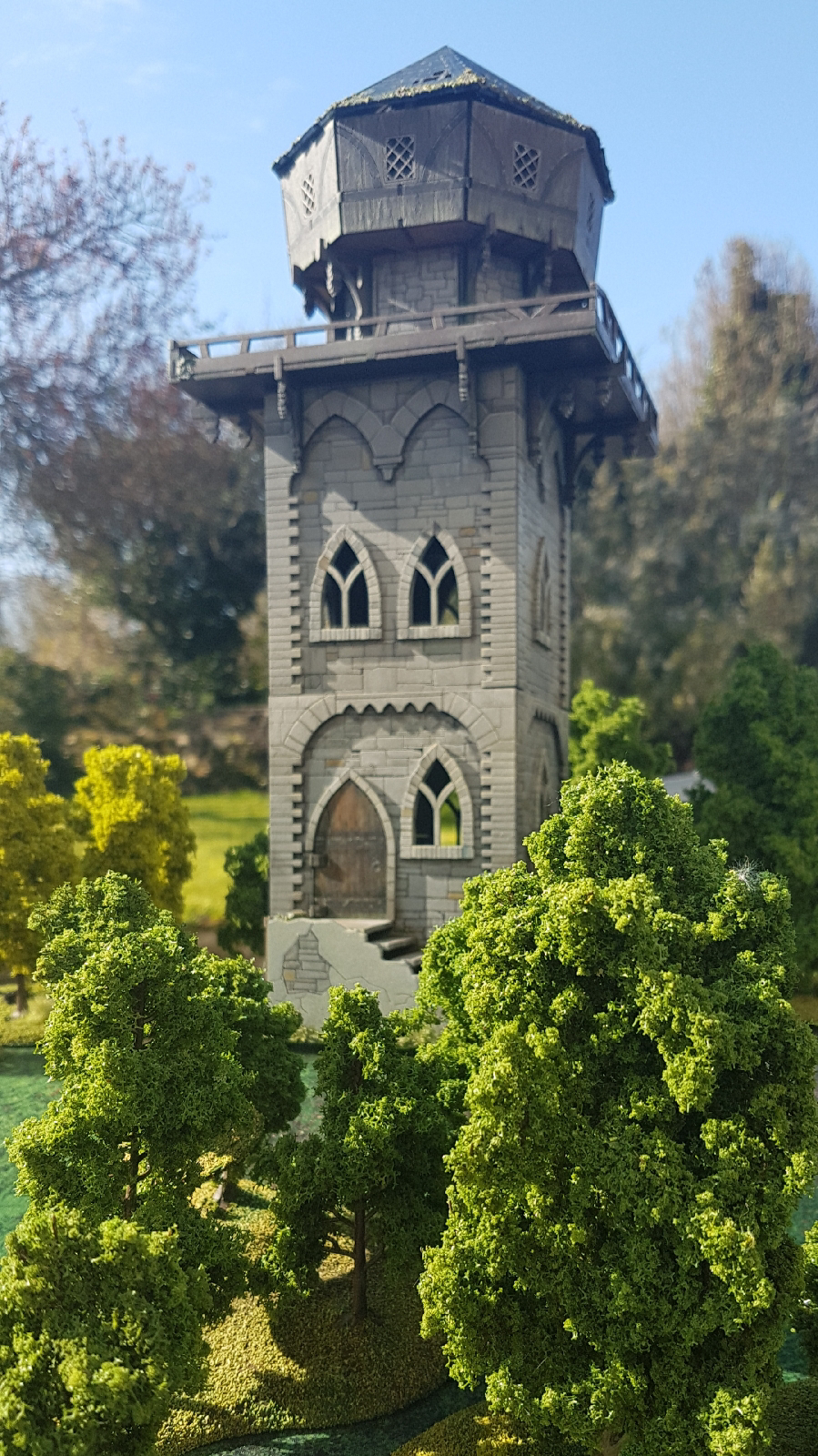 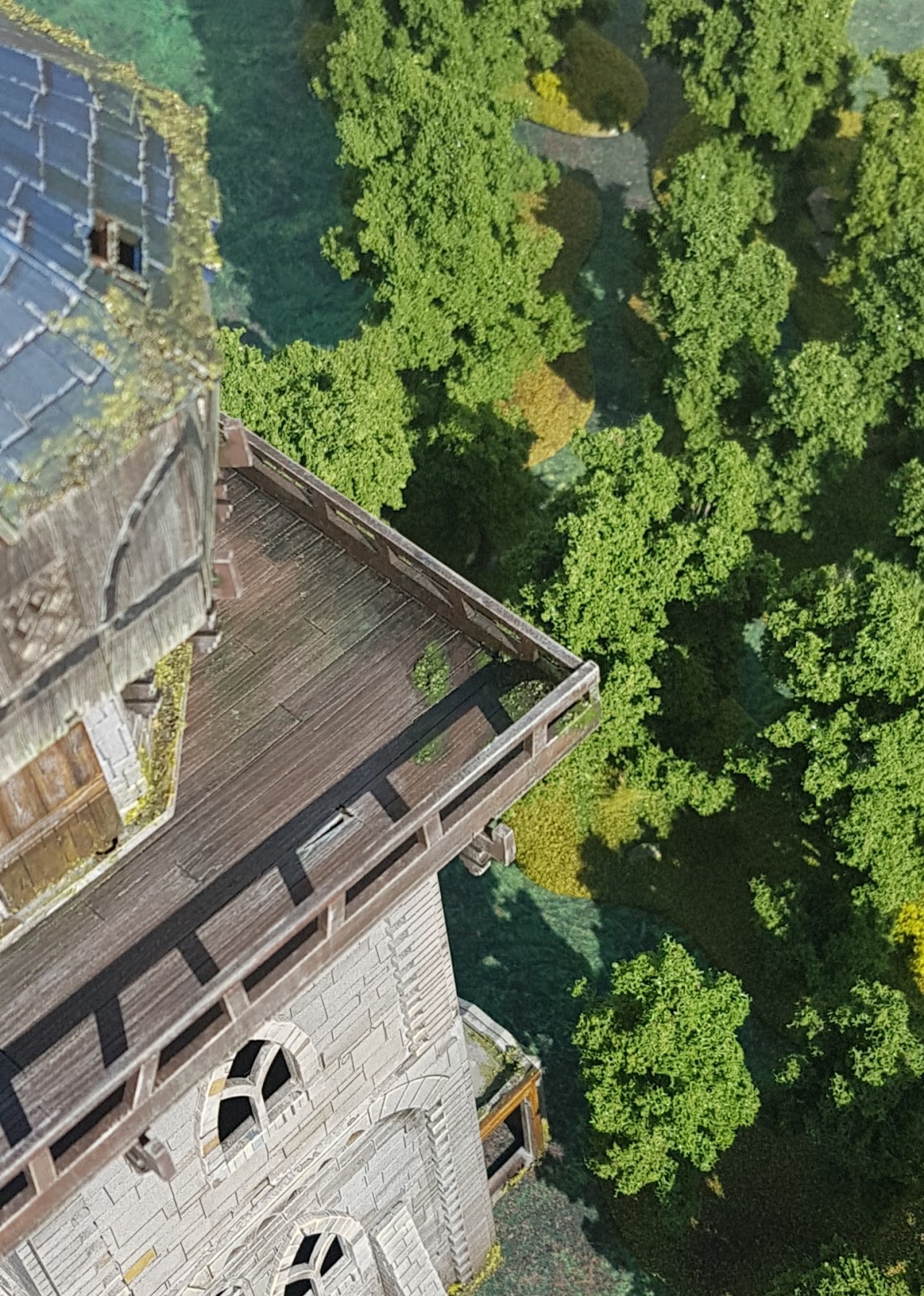 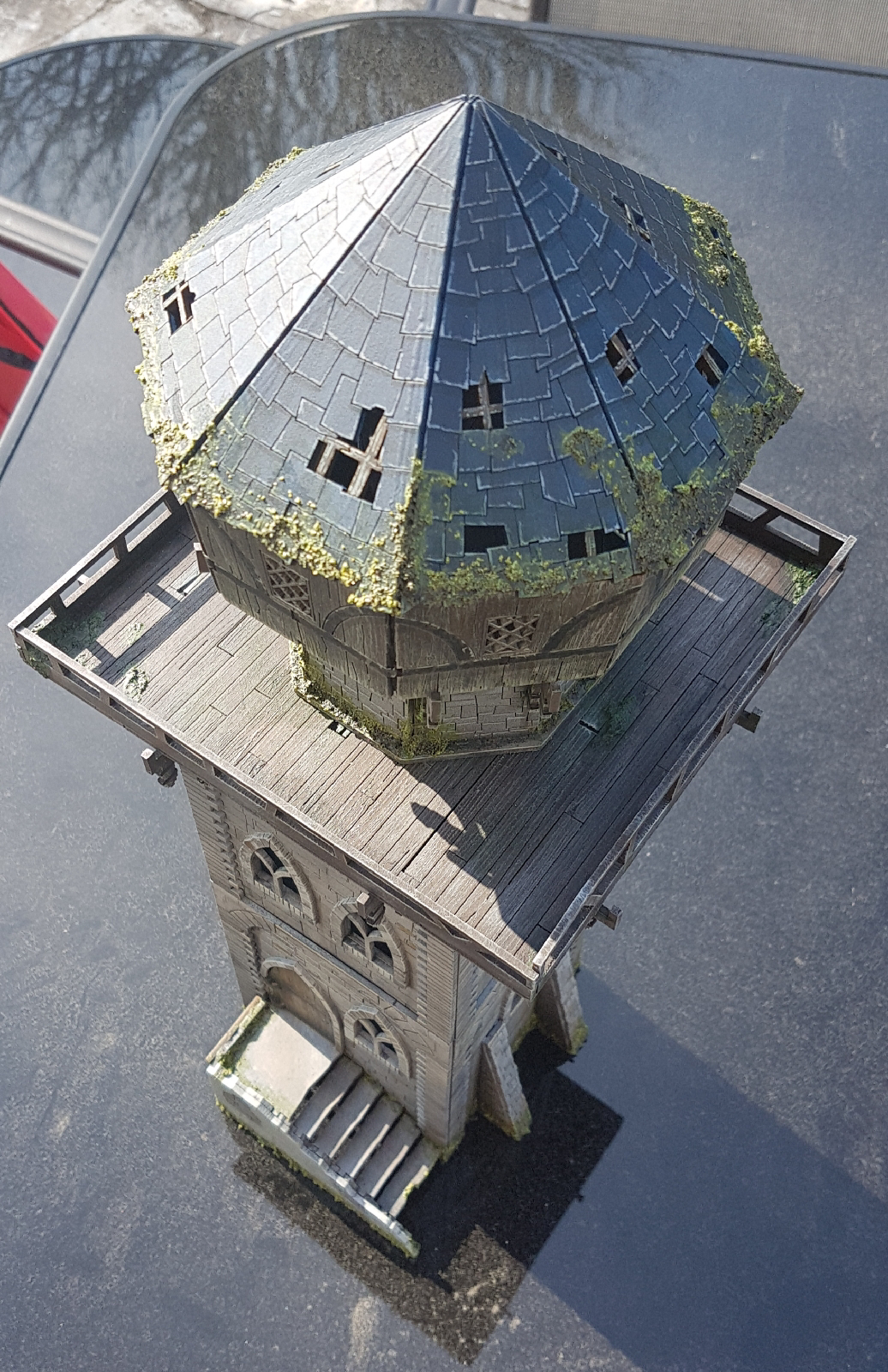 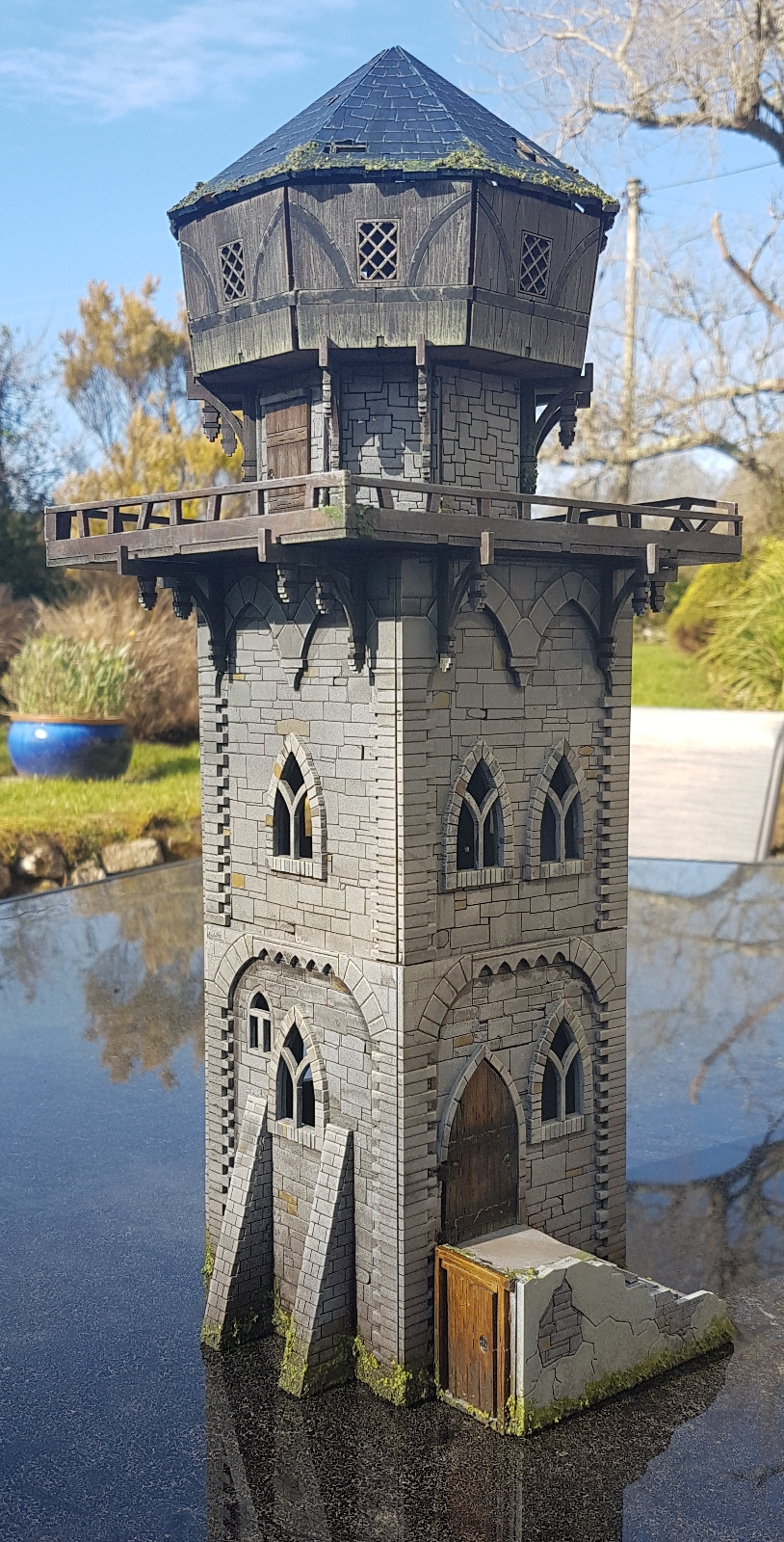 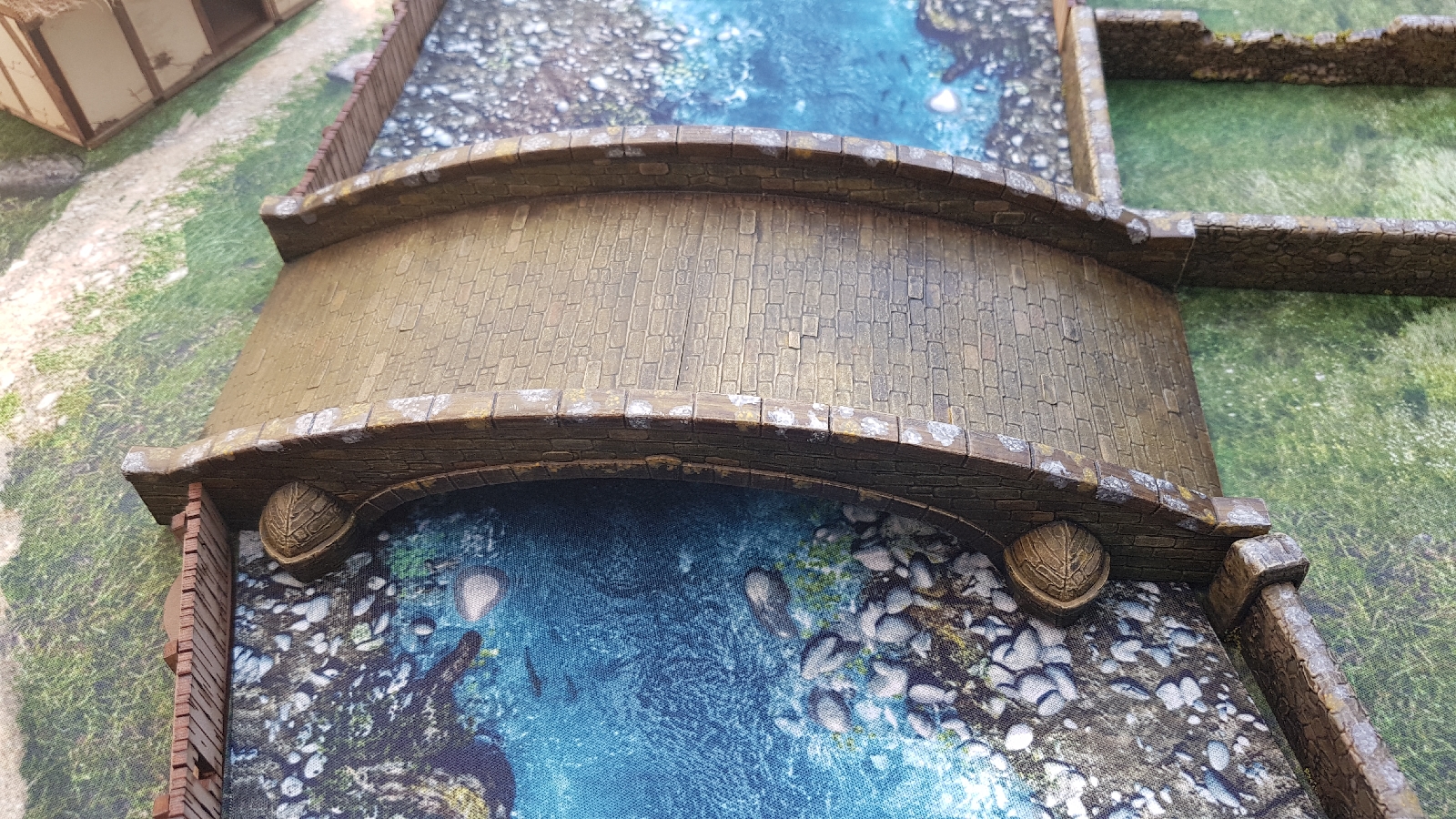 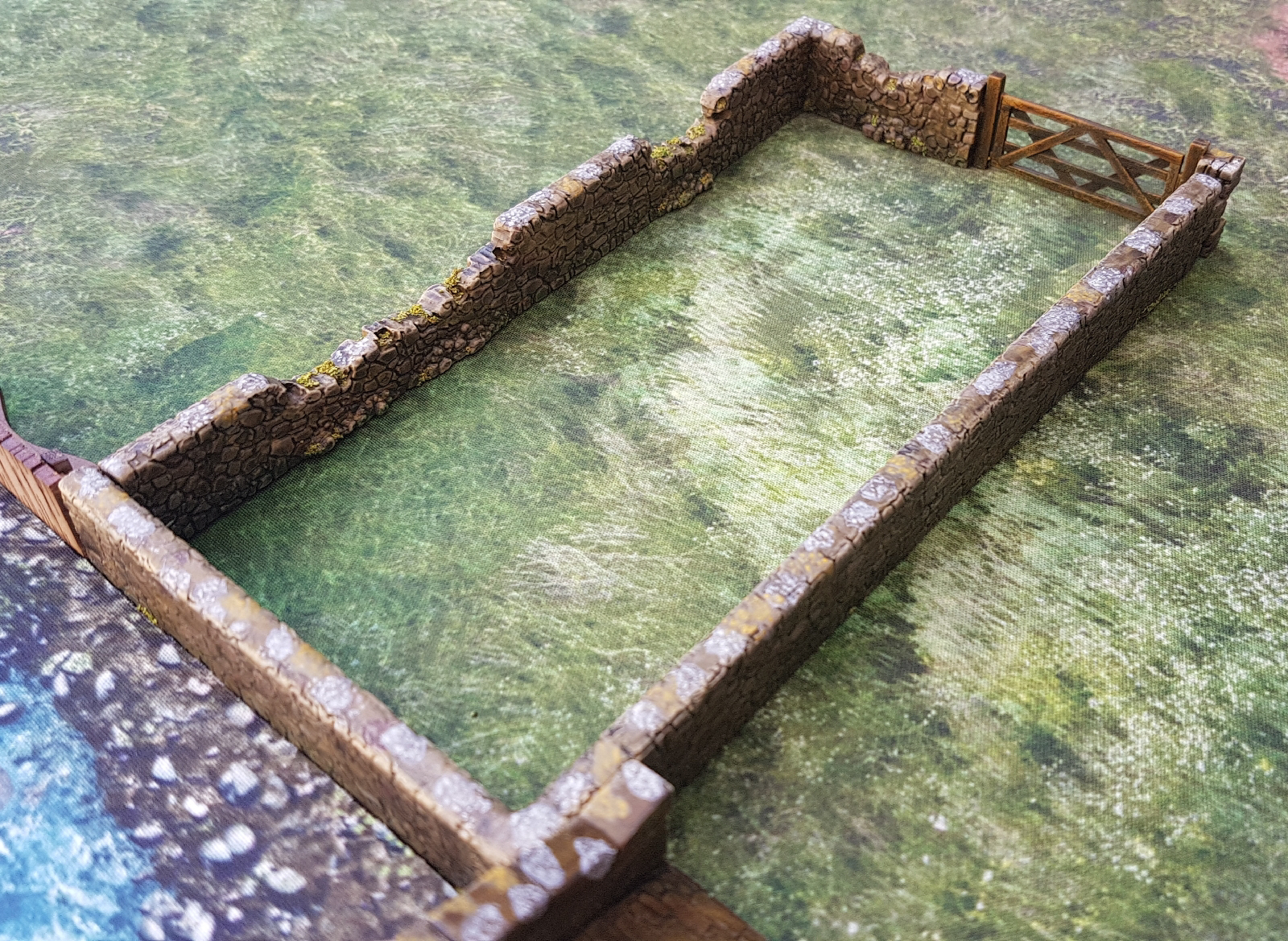 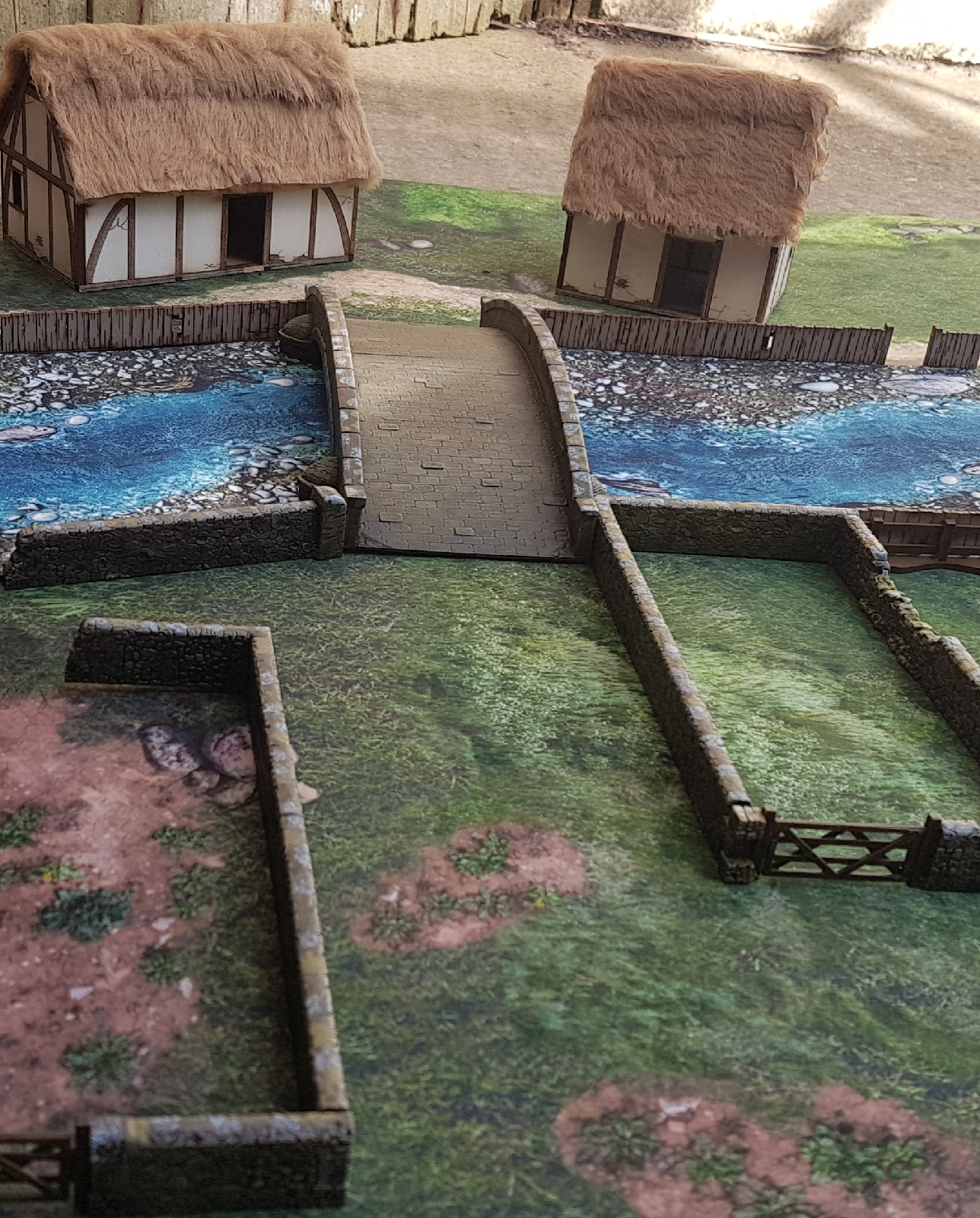 So.. things have been busy these last two months and I have completed two new projects that were not even on my list two months ago (naturally).

I have a draft of a new Rangers of Shadowdeep mission, At Any Price, which is complete and uploaded, but needs more testing before I post it to the Facebook group, and a new Warzone mission, Storm Warning, which I already posted to the Warzone forum.

Now I am taking a break from the writing to do proper hobby stuff; namely I am painting up my TTCombat Sector 3 stuff which I need for my "Mars" Warzone table. A few panels still need masking and spraying white and I haven't decided if I will paint the hand rails orange or yellow yet, but the sponge chipping and washes that follow shouldn't take too long and then it will be complete. 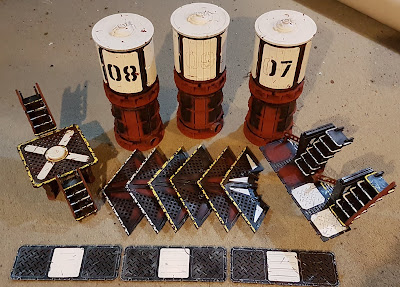 I also ordered some more Forward Base buildings from Antenocitis. My original layout called for only two, plus the garage and two connecting corridors. However I picked up the hub at some point and now I have another three on the way. With 7 buildings I will at least have the option of filling a table with them, or splitting them between two 4x4 tables along with my GF9 and Sector 3 pieces.

As an added bonus, I should be able to use some of this terrain for Gamma Wolves. Having been inspired by the many great mecha models in the Facebook group I have dug out an old AT-43 Red Blok walker for a heavy frame and have purchased a few 1/144 Gundam kits that will be kitbashed into medium frames. They won't get painted any time soon, but I look forward to completing the models so that I can try the crew out.

The WZR mission "Kill The Messenger" is now complete. I also tidied up the version of Ilsa from Kirkwood and baked it into a PDF. Next I will work on doing the same for the Environmental Hazard rules before I return my attention back to the Fallout campaign system I've been working on. On the hobby side of things, I am slowly working towards minis and terrain required for Deniable Ops.

RoSD Black Hart is now complete. Time for a little bit of hobby before I get on with the next mission on my to-do list!

Email ThisBlogThis!Share to TwitterShare to FacebookShare to Pinterest
Labels: rangers of shadowdeep, writing

One of the things that has been keeping me busy over the last 2 years - besides work and family life - has been my participation in the rules and play testing team for Warzone Resurrection. While the future of the game is no longer in the hands of Prodos, there remains an amount of written work (rules, profiles, fluff etc)  that was created by the team but never officially finished. The plan was to collate these pieces of work - or at least, the pieces that made sense to include together - and release them as part of the Kirkwood expansion.

Of course, things went sideways and that didn't happen in the slick and polished manner we wanted (indeed it was super hard to get it published in any manner) but eventually a PDF was cobbled together and released. This was largely the last "official" act from Prodos and the rules team, but the quality (and indeed the completeness) of those individual efforts varies greatly. It is my intention to continue working on several of the documents until they reach a standard that I am happy with and these will be released here.

Warzone is not the only game that I am writing content for. In an entirely non-official capacity I am also working on 'proper' campaign systems for both Mantic's The Walking Dead as well as the Fallout Wasteland Warfare game from Modiphius. I have also been working on missions and house rules for Rangers of Shadowdeep. This means that, alongside my hobby projects I also have a number of 'content' projects in the works, and here is the current state of the queue:

There is also the matter of Warzone Resurrection Deniable Ops, which is currently 'rules complete' at 111 pages including 19 missions, and is available at version 0.14. In terms of the written effort, it needs testing and balancing, as well as general editing. The next version will be 0.2 but this is way down the queue because the biggest challenge is now in terms of layout and interior art / photographs and the latter is being held up by my lack of painted models and terrain. 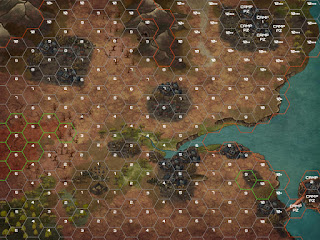 (Above) A preview of the hex-based campaign map for Fallout.
(Below) Two of the four maps in the RoSD mission "Black Hart" 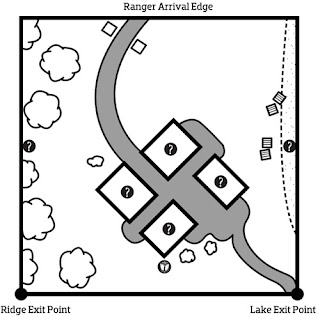 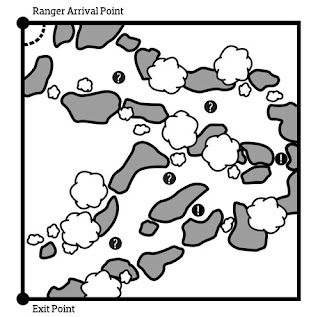 A River Runs Through It

The last few months, my limited hobby time has been taken up by with assembling a pool of miniatures and terrain to use with Rangers of Shadowdeep, the latest D20-based game from Joseph McCullough  (of Frostgrave fame). 4Ground might have made a small fortune from me when I consider how many of their trees, fences and buildings I have picked up for this, but one thing that I couldn't find a good solution for are water features; specifically, rivers.

The best tabletop rivers I have seen have always been hand made, single-section affairs that look beautiful but would be a pain to transport. Modular rivers have been around for ages and plenty of people make their own, but the glossy surface of the water (which looks good!) always draws attention to the segmented nature of the terrain and there are always noticeable lips or gaps (which look bad!). For that reason I decided the best compromise would be a neoprene based solution and there were only three well-known manufacturers to choose from.

The offering from Deep Cut Studios looks nice and has the advantage of coming in two flavours (clean and dirty) but there is a lot of grass on either side which makes the tiles less suited to non-grassy mats. In addition - and this is a personal beef - the river itself isn't very wide. If it looks like a model could take a running jump over it, the river just isn't wide enough in my opinion!

Playmats.EU also offer river sections and from the photos, I think the artwork is closest to the style I am looking for. The river banks themselves are narrow, and the sections themselves are cut to follow the shape of the river which results in a more natural look. Price wise they are inexpensive per section, but by the time you add 5 or 6 sections to your cart to ensure you can cover your 4ft table and switch up the layout now and again, you end up paying about the same price as Deep Cut or GSW (below). However, two things made me hesitate - the plastic surface on the river sections, which solve two problems but create two more, and the width of the river itself.

In the end, I decided to try the river sections sold by Green Stuff World called the Water River - Neoprene Terrain Set. Even by the time you add shipping, the ~ €30 price tag is very reasonable for the number of tile sections you get and most importantly, the river itself is a decent width and does not resemble a glorified stream! Green Stuff World put out their own youtube video to show off the tiles but it didn't really answer my questions. How well does the detail scale? How versatile is the colour palette in case I want to use it on a variety of mats? How good is the production quality on 'retail' sets of the tiles? 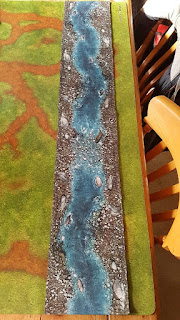 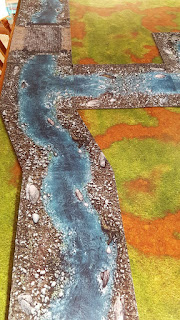 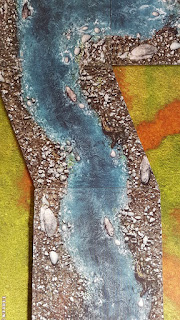 We start with my 4ft jungle mat, which is primarily a vibrant green and orangey brown. Obviously the colour isn't great match but the important thing to note here is that the 'long' river sections are basically 12" long but there are only three of the 'plain' sections, meaning you will need to include a bridge or a crossing if you want a straight river like the picture on the left to run the length of a 4ft table. You can include the other sections to mix it up a little, but due to their shorter length you will probably end up with the river overhanging your table or mat. The texture on the tiles matches up nicely no matter which pieces you use, although with the straight edges to the river banks it does look a little strange. Of course this is easily fixed if you are prepared to attack your new river tiles with some scissors!

In terms of production quality for the individual tile sections, I would say this was "pretty good", a solid 7 out of 10. The edges on about half of the tile sections were slightly frayed (see left) but you can only see it up close. Also, because the sections are rather light (a good thing if you are carrying these around) the corners don't always lay flat on the table. Of course this is a problem with gaming mats too, but the total weight of the mat counteracts this. I suspect this is part of the reason that Playmats.EU put the plastic layer on top of their rivers, but since that has disadvantages of it's own, I don't see any way to avoid it. The actual art on the sections is excellent, as is the print quality. 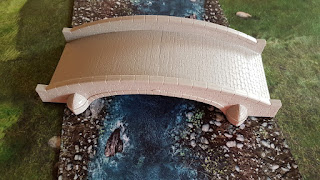 See what I mean about the width of the river? That's a plastic bridge from Warlord. 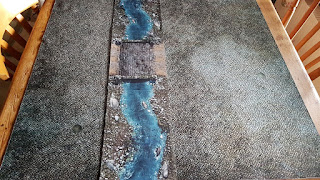 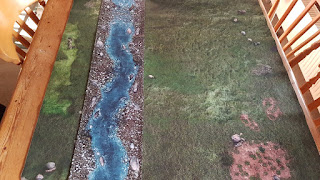 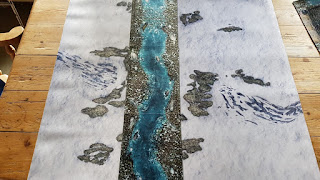 The river on 3ft cobblestone, dark grass and snow mats. Although there is a splash of green on the river banks, it is subtle enough that the greys and browns really help the sections blend into the cobblestone mat. With walls running along either side, I think it will look great, perfect for Malifaux or Warmachine. 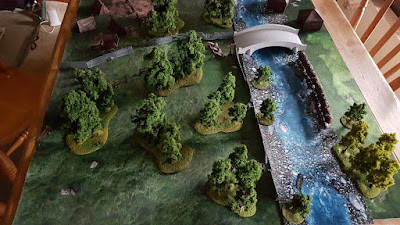 With some loose rocks and foliage you can easily hide the edges of the river sections. Or you can just use some walls and hedges as I have done above with a table set up to play Rangers of Shadowdeep.

Overall these tiles have convinced me that this is the best compromise if you can't have a single length of river you have made yourself. They look awesome at a distance and still pretty damned good up close. The built in bridge sections are handy and there are several "dead ends" and corners if you want the river to play a bigger part in the layout of your tables. Hopefully Green Stuff World will one day offer an expansion set because a few streams wouldn't go amiss, along with some 45 degree turns to help the layouts look more natural.